14 Must-Follow Tips for Naming Your Startup 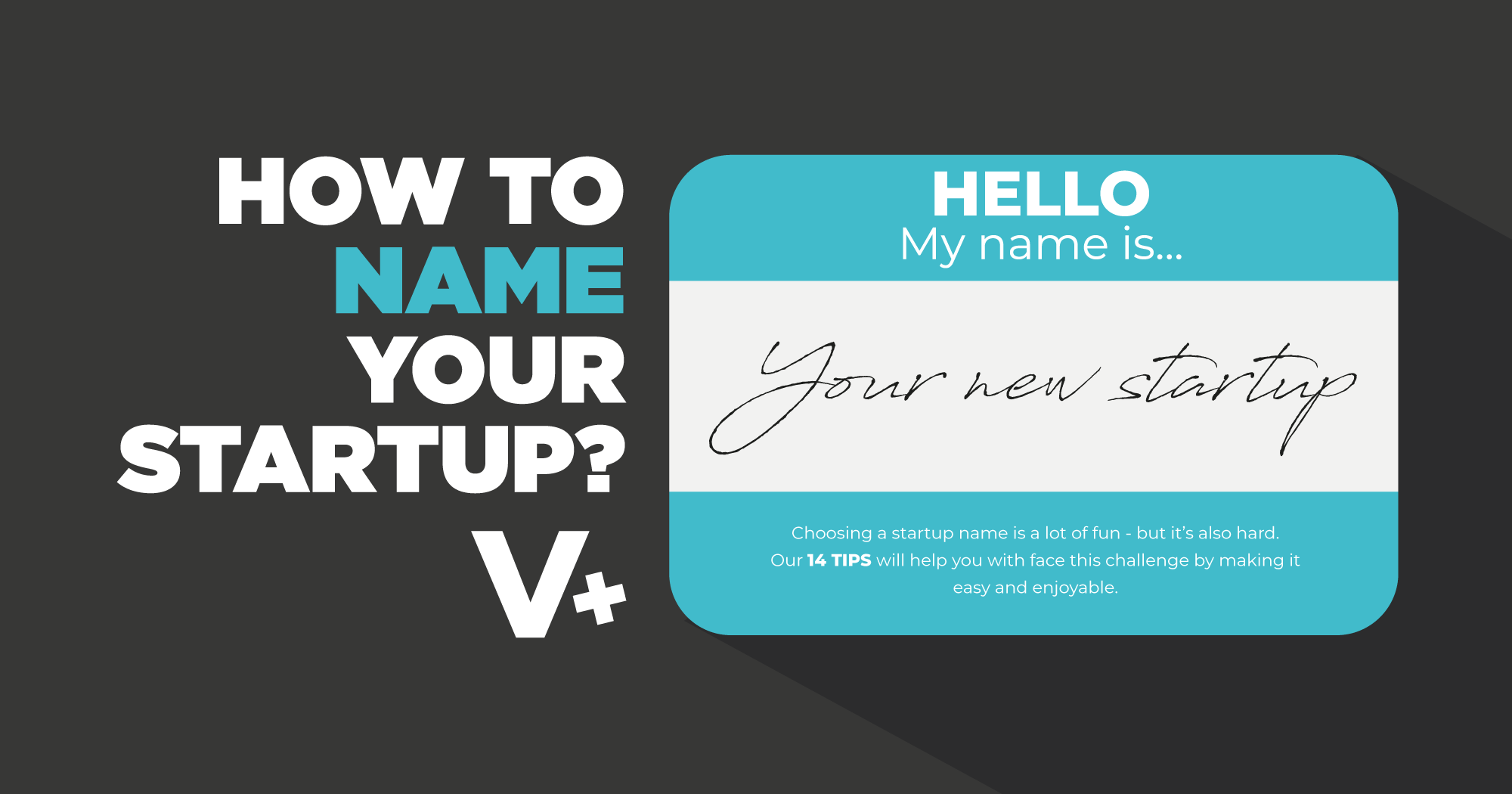 A startup name. It’s what people use to identify your company, and it can seem like a daunting task. It’s the face of your company and everyone wants theirs to stick.

Why is the name so important?

A bad company name can be a signal to investors that you’re not to be taken seriously. So don’t let mental blocks overwhelm you on your path to creating a great name.

Let's say you have your headset on a name and you love it. The only problem is, you’ve pitched it to your friends, and they don't get it.

The question is, how do you create a memorable name? It doesn’t have to be as hard as you think. Here are 14 tips that will help you with the challenges that come with choosing a startup name. 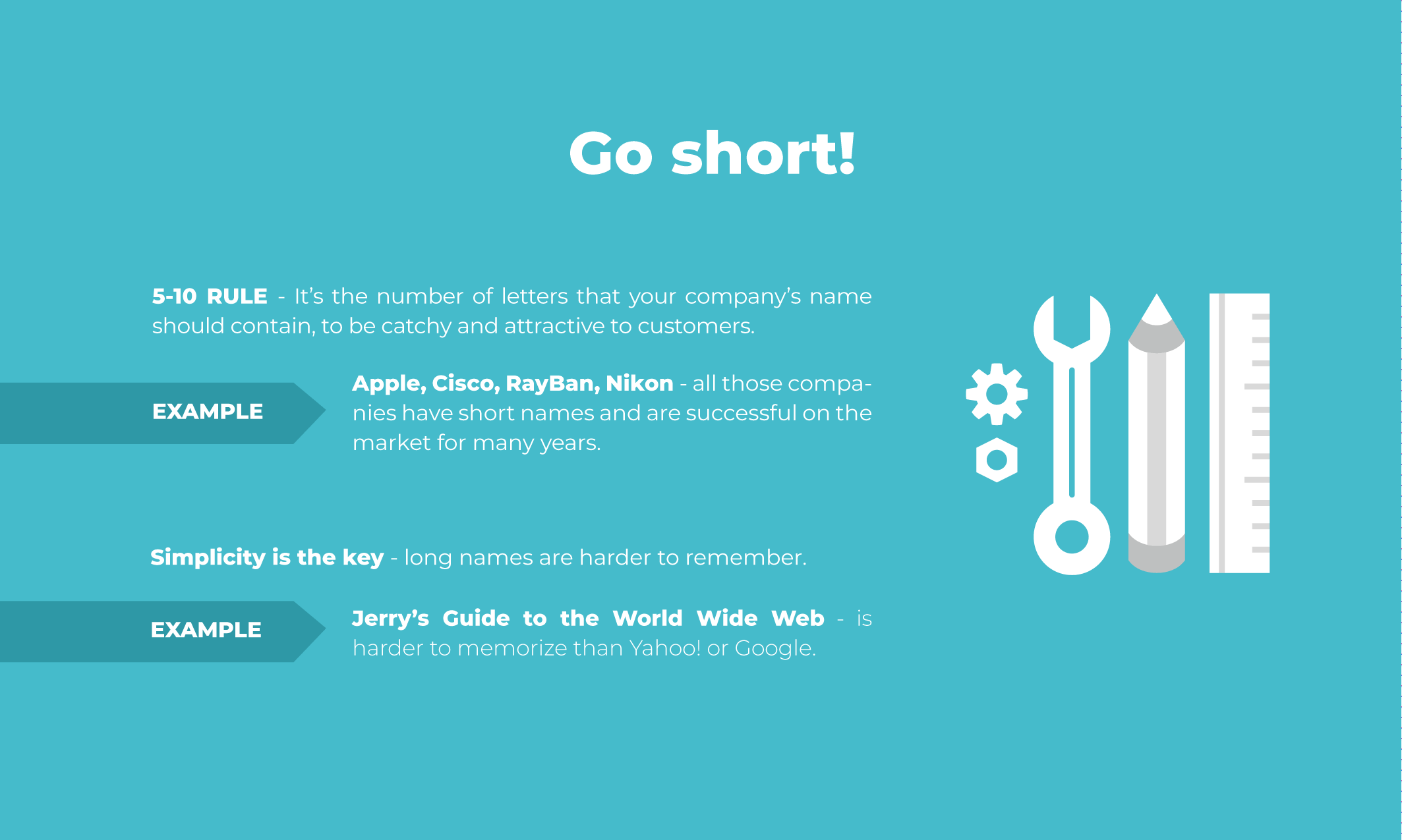 Follow the 5-10 rule. It’s the number of letters that your company’s name should contain to be catchy and attractive to customers.

Example - Cisco, Apple, RayBan, Nikon. All these companies have short names and have been successful on the market for many years.

Simplicity is the key, as longer names are harder to remember.

Example - Jerry’s Guide to the World Wide Web - it’s harder to memorize than Yahoo or Google.

A story behind your startup’s name gives it more character and makes it all the more special. If you have a smashing marketing strategy to go along with it, it’ll make it all the more unique and memorable.

Example - Nike, it’s the Greek goddess of victory. Nike uses the brand name to help their customers feel like winners.

The name should be easily applied in a graphic design. And the logo and title should go hand in hand, complementing one another.

Example - Soundcloud, the logo, and name complement each other perfectly, as well as describing the purpose of the company in one word.

Your company’s name should be connected to the industry that it’s working in. There's an abundance of companies that have done this both right and wrong. And some of them are pretty hilarious. If you want investors to take you seriously from the get-go, make sure your vision and your title are one in the same.

Check what your name means in different languages - don’t offend your potential customers. It's easy to let this one slip the mind, but to avoid a future upset, it's best to double check your company name.

Example - Pupa, it’s a pretty controversial name in Poland...we’ll let you discover it’s translation for yourself.

Avoid picking a name that has been used before. There are tools that check whether or not your company name is taken, see section 'Use Expert Help'. And finally, your startup’s name should be easy to pronounce.

Example - Xobni, is it Zombie...Snobby...nobody will ever know. The email analytics company also closed its doors back in 2013. 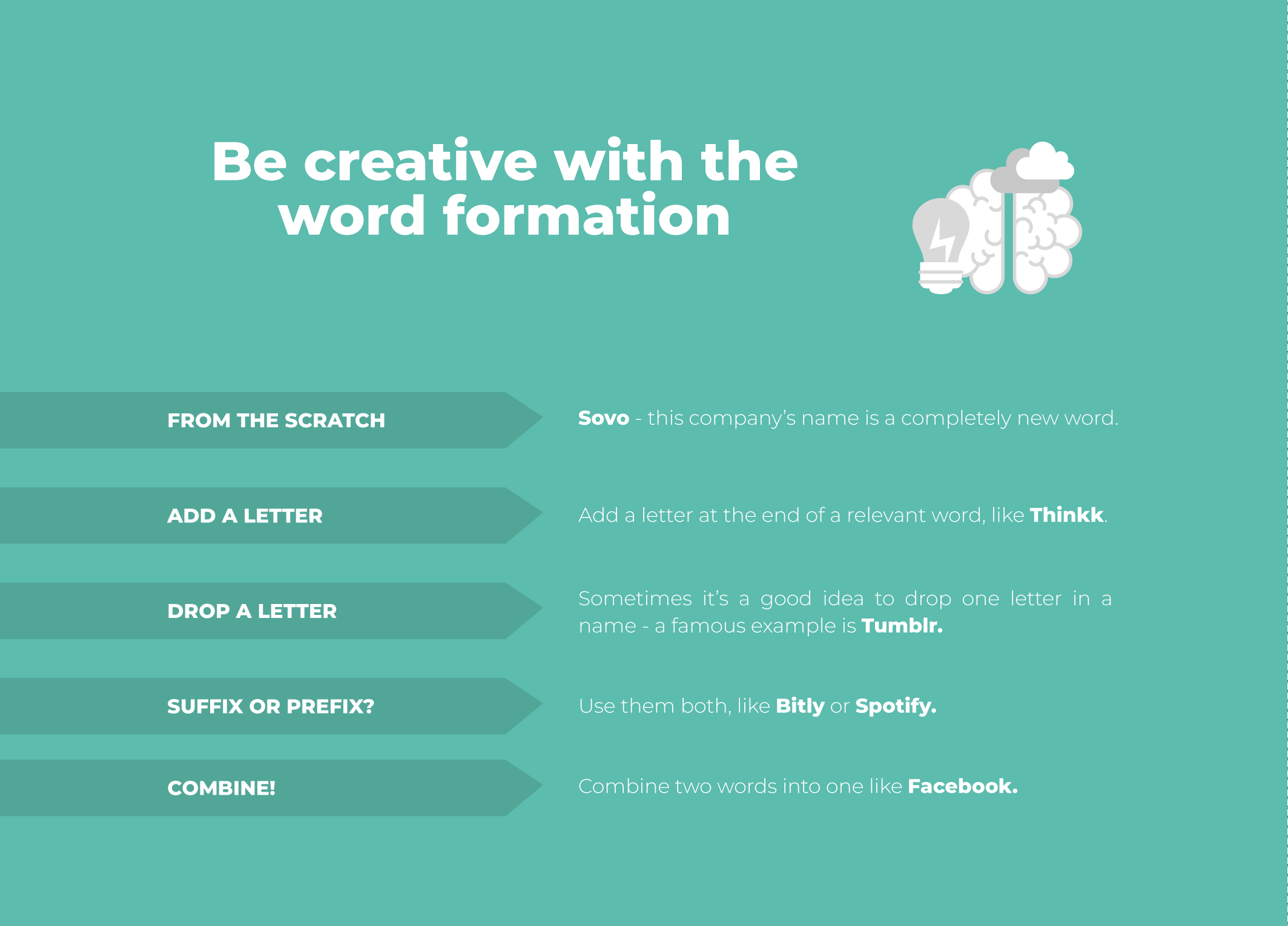 The best part about picking a company name is the room for creativity.

You can start from scratch, forming a completely new word.

Or you can add a letter to your name, or at the end of a relevant word, like Thinkk Studio.

Drop a letter. Sometimes, it’s a good idea to drop one letter in a name - a famous example is Tumblr.

Suffix or Prefix. Use them both, like Bitly or Spotify

Combine two words. MailChimp is a perfect example, their marketing strategy is also very entertaining, unique and memorable. They took names that rhymed with or sounded like MailChimp, like 'MaleCrimp' and 'FailChips', turning these 'alternative' brand names into their own unique ad campaigns.

There are consultants in the market that can help you, but usually, it’s not cheap. Even so, here’s a list of some free online resources if you're open to anything.

Say it out loud. Check how your name sounds and get feedback. Ask your family and friends, your neighbors, your co-workers, the more opinions you get, the better.

If you have the resources to be able to test the market, try advertising your company with different names and see what works best.

Don’t pick names that suggest unpleasant situations or have negative connotations. At worst, your company could shut down, at best, it'll give people a good laugh. If you get it wrong the first time, it's not the end of the world, you can choose to rename your company.

Example - This startup was a place for fashionista teenagers to crowdsource fashion advice. The name? Fashism...needless to say, the company shut down in 2013.

The best things come to those who wait. If you really want to have a title that will turn heads, it’s better to spend more time creating the proper name, rather than rebranding the whole company later.

However, there are a number of companies that have rebranded, changing their name along the way. If you do feel that your company is in need of a name change, which is an exciting journey in itself, make sure to keep a few things in mind.

Is your name no longer relevant? Is it too generic? Are you having copyright issues? Or is it just way too much of a mouthful? If you check at least one of these questions, it's worth going through the process of finding a new company name.

It's always annoying when you think you've finally found the one, only to find out that it has already been taken, or even worse, it's trademarked. There are an unlucky few that didn't find out their name was trademarked until much later.

It's possible that you could encounter some legal issues when you're naming your company. In the U.S., you can check the U.S. Patent and Trademark Office, and the European Union Intellectual Property Office in the EU, to avoid this kind of situation.

Geographic names - it's helpful if you're limiting your market to the area you're referring to, but if your looking to expand outside your local areas, avoid it. They limit your market potential, it’s not usually beneficial if you want to expand your business to other areas.

Example - Kentucky Fried Chicken is one of the most well-known examples who came across this issue. Instead, they rebranded, abbreviating their name to KFC.

Check if your startup’s name stands out from competitors. If your name is bog standard it'll run a risk of sounding generic, and your chance of standing out will be rather slim.

Last but not least, pick a name that you like! It’s your creation, be proud of it, because you’re going to work with it for a long time.

Think international, make sure that your company doesn’t make too many embarrassing logo mistakes by choosing names that have already been used, or choosing a name that means something offensive in another language. It’s fairly common.

The 14 steps you need for naming your startup from Valuer

All in all, mental blocks can be a difficult feat to overcome. But to get the best results, go into the naming process with an open slate. Don’t let your wants and need get in the way of creating the name that’s going to make you memorable to investors and customers alike.

Adrianna is a motivated graphic designer. She is a native Pole who moved to Copenhagen in 2017 to study Biomedical Engineering at the Technical University of Denmark.

While tech startups might not be among the first things to spring to mind about the Nordics, these Nordic startups are quickly making a name for themselves

9 Ways AI can Help Your Startup

Artificial intelligence in a startup is more common than you think. There are numerous ways of integrating AI tools that will increase work productivity.

Feeling Fatigued? How Not to Burnout as a Startup Founder

Entrepreneurship isn’t easy and burnout can occur. Learning how to not feel fatigued whilst juggling many tasks is important for startup founders.

How Can Companies Protect Customer Data?

Innovating Sustainability: The Future of Food and Agriculture

Why New Business Models are More Relevant than Traditional Ones