There is no better time to go ‘all in’ with investment in innovation. It ensures that the company is not left behind and enables companies to surpass potential competitors.

According to McKinsey, 98% of the economy is influenced by modernization and digitalization.

In this article, Valuer covers interesting corporate innovation facts and the development and improvements of innovation in recent years.

Innovation ‘before’ and ‘now’

It is still a common perception that to compete in a changing and challenging market, one must invest heavily in research and development. But that is not necessarily the case. In industry jargon, this is what we would call "closed innovation".

Typically, the mindset of those working in a closed innovation ecosystem follows a closed line of thought. You strive fiercely to become the first to market and the development process happens behind a closed door. 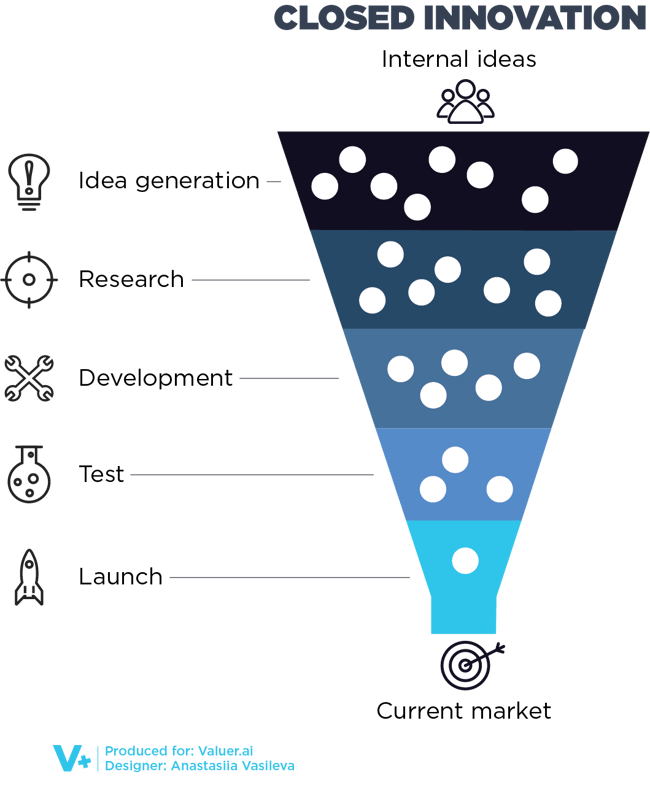 But times are changing and early adopters are beginning to adapt to a new model of innovation. Closed innovation is becoming less important.

Nowadays, companies are more open to change from inward-focused innovation to open innovation. Entrepreneurs have understood that the environment around them can be used very efficiently. The goal is to be open to new ideas, technologies and external talents. 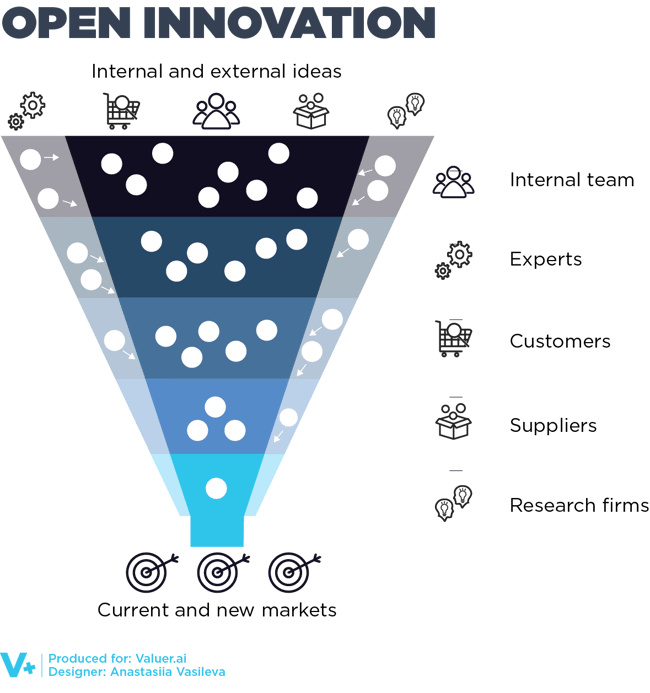 There is still a way to go, but the attitude is shifting toward a more sustainable and collaborative attitude.

1. A corporate innovation leader will spend, on average, 3.2 years in their position.

2. On average, a corporate innovation leader's career will last 18.6 years.

3. Over the next 10 years, around 50% of the companies currently on the Fortune 500 list will be replaced. The life expectancy of large companies is rapidly declining as startups enter the market at a rapid pace.

Photo by Justin Little on Unsplash

4. Considering the importance of innovation in the survival of a company, it is surprising that only 43% of business managers agree that innovation is a competitive essential for their organization.

5. 93% of business executives believe that organic growth with the help of innovation will contribute to greater revenue growth.

6. According to the UNESCO Institute for Statistics, 80% of the worldwide spending on R&D is split between 10 countries, reaching an astounding high of $1.7 trillion dollars. In order of amount spent, the countries are as follows: USA, China, Japan, Germany, Korea, France, India, UK, Brazil, and the Russian Federation.

7. In 2018, IBM was the most innovative company in the world with 9,100 patent grants, among them are patents for artificial intelligence, blockchain, cloud computing, and quantum computing.

8. According to Futurum, a staggering 70% of corporations believe that the CEO of the company has a practical and above-average understanding of new technologies. Let's hope that's true! 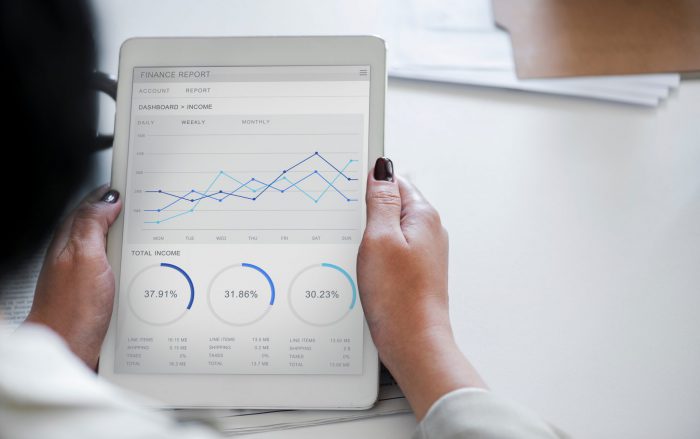 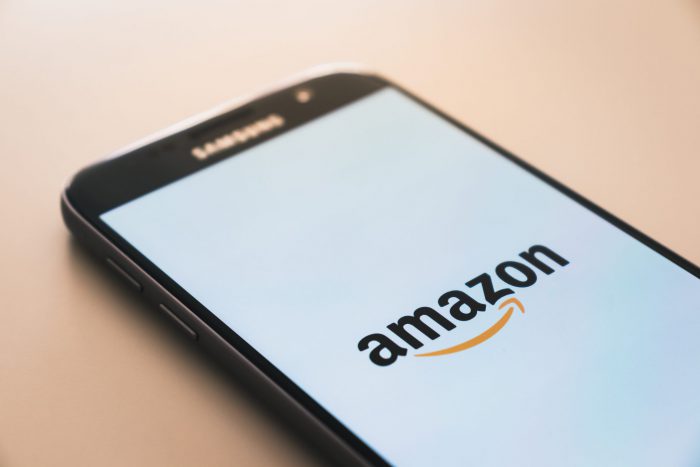 Photo by Christian Wiediger on Unsplash

13. We can expect to see more partnerships and collaborations taking place between corporations and startups as 80% of corporates are interested in knowing more about startups and pursuing a professional relationship.

14. 56.9% of corporate innovation leaders face the challenge of encouraging an internal culture of experimentation and innovation.

15. 3M employees are required to spend 15% of their time on innovative ideas after working hours!

16. Google's innovation lab, the X lab, is named after a failed project. 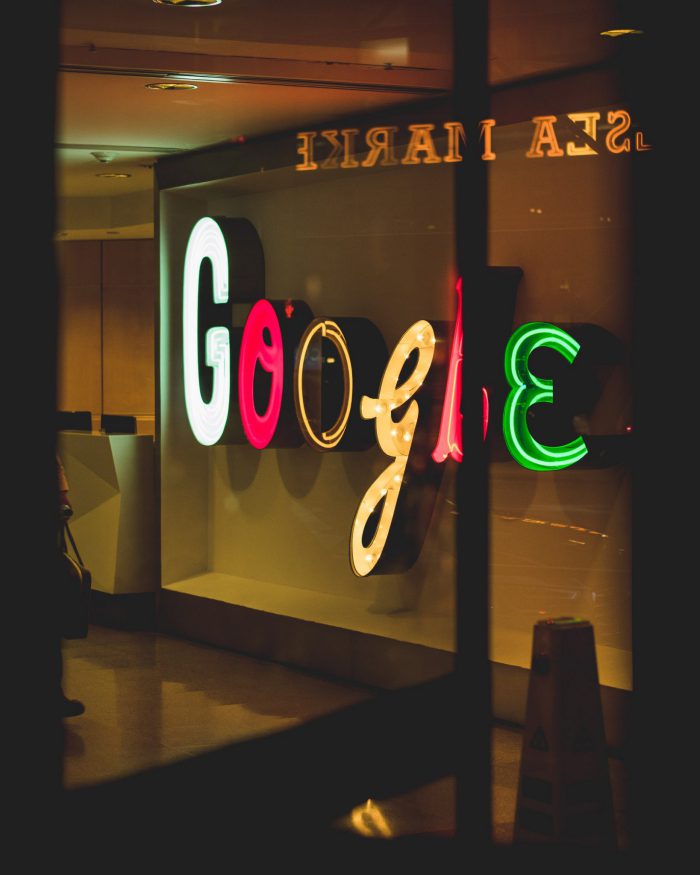 Photo by Arthur Osipyan on Unsplash

17. The commonwealth’s innovation lab in Australia is 10,000 square feet, and cost $3 million to build.

18. 84% of customers feel that it is very important that the company they buy from is innovative.

19. 9 out of 10 customers say that brand innovation should have an impact on society. 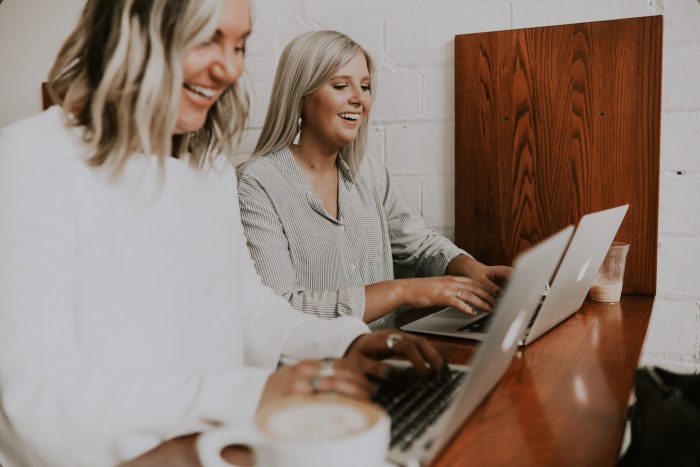 Photo by Emma Dau on Unsplash

20. McKinsey published a report in which they found that 80% of business executives believe that their current businesses models are at risk. A further 84% think that innovation is a crucial factor of their growth strategy, and only 6% are satisfied with their innovation performance.

21. 80% of innovations are created by someone outside the field where the innovation occurred.

22. According to PR Agency, Edelman, 9 out of 10 customers agree on the fact that brand innovation needs to impact society.

23. PWC's annual Global innovation 1000 report found no statistical evidence to prove a correlation between money spent on R&D and financial performance. A logical conclusion would be that it is how you spend the money, rather than how much you spend that is important.

24. A huge percentage of business executives, 93% to be exact, think that innovation driven by organic growth will increase their revenue.

25. In a survey by PWC, over half of business executives (54%) said that they find it difficult to align their businesses and innovation strategies.

26. "Over 83% of customers would pay more for innovation in electronics with 15% of these willing to pay over 40% more." - Customer Think

28. In a 2017 survey on innovation benchmarks, PWC found that sales growth is the top metric for innovation.

31. "35% of companies say customers are their most important innovation partners" - PWC 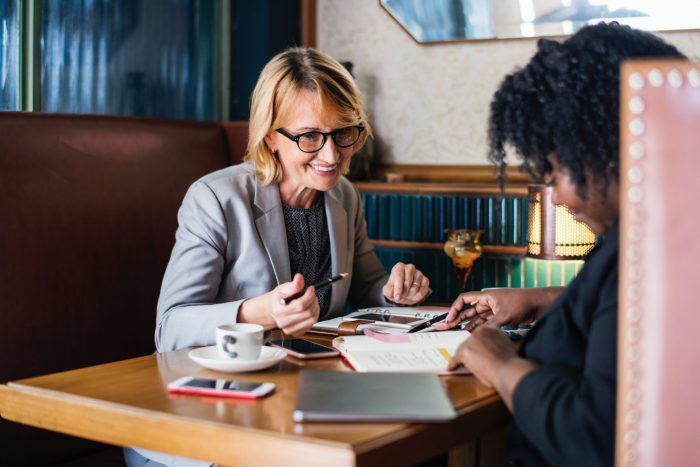 32. The mega-corporations Apple and Stanley Black and Decker, according to a report by PWC, are the only two companies over a five year period that "qualify as high-leverage innovators".

33. According to PWC, companies that re-invest 15% or more of their revenue are more likely to create breakthrough innovations.

34. While tensions grow between the two powers, Asia looks to the U.S. for inspiration as 34% of business executives see America as an innovation champion. A further 64% hold this belief in China.

35. "60% of innovations over the last five years have not resulted in a positive impact on the bottom line." - Edelman Intelligence

36. "IT, customer care, and marketing departments tend to score better than other departments when it comes to their ability to adapt to technological change." - Futurum

37. "Conversely, HR, Legal, and Manufacturing are most likely to be considered slow to adapt to technological change." - Futurum

38. Only 50.4% of companies express a positive outlook when asked about technology disruption. 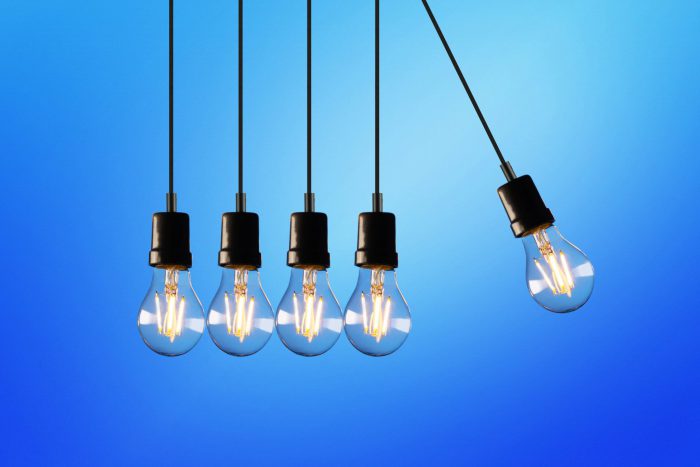 41. Although many of the companies that were listed in the 1955 Fortune 500 list no longer remain, there are some companies that are still in operation. Among them are Boeing, Campbell Soup, Colgate-Palmolive, Deere, General Motors, IBM, Kellogg, Procter and Gamble, and Whirlpool.

43. The Bank of New York Mellon, founded by Alexander Hamilton, if the oldest company to remain on the Fortune 500 list. The company was created in 1784.

44. Revenue and profits have long been the metric used to measure the success of a company. But as the interests of investors' shift toward low-overhead and high-market-cap, the measurement is leading more to market capitalization. 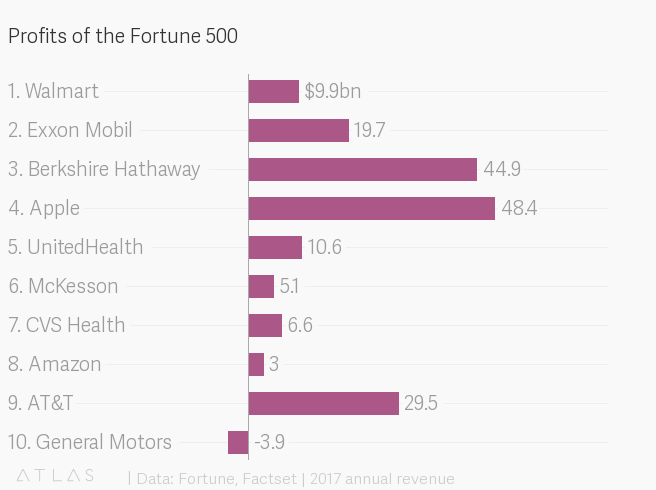 45. While Amazon's profit and revenue are comparatively smaller than Walmarts (around a third less), their market capitalization is three times the size.

46. The four most valuable enterprises from Fortune 500 are tech firms.

47. According to PWC, more than one-quarter of companies see themselves as innovation leaders.

48. There are over 456 corporate innovation centers in North America and they are showing no signs of stopping any time soon.

49. The top five innovative companies of 2018 were Apple, Google, Microsoft, Amazon, and Samsung.

50. Instagram would be worth more than 100 billion dollars if it were it’s own company and not a Facebook division - it is 100 times more valuable than it was when Facebook bought it. 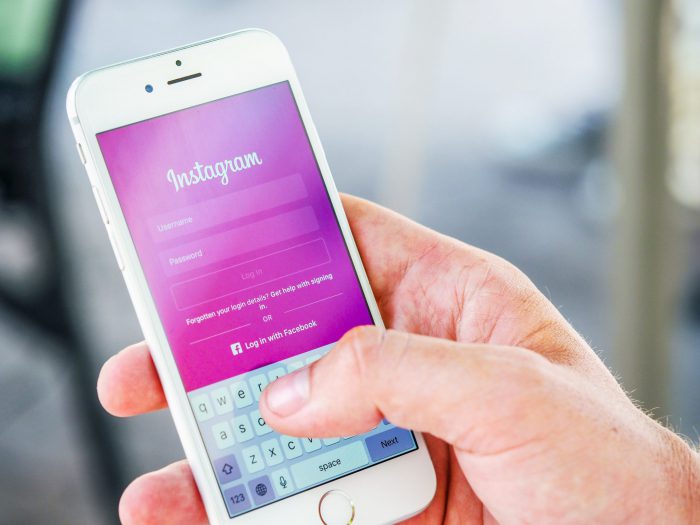 52. The Garage was opened by Google to encourage employee out-of-the-box thinking.

53. Originally ‘’innovation’’ was not a compliment. In fact, it was an accusation. In 16th century Europe, for innovations against the church, you could go to prison for life or your ears would be cut off. Ouch. 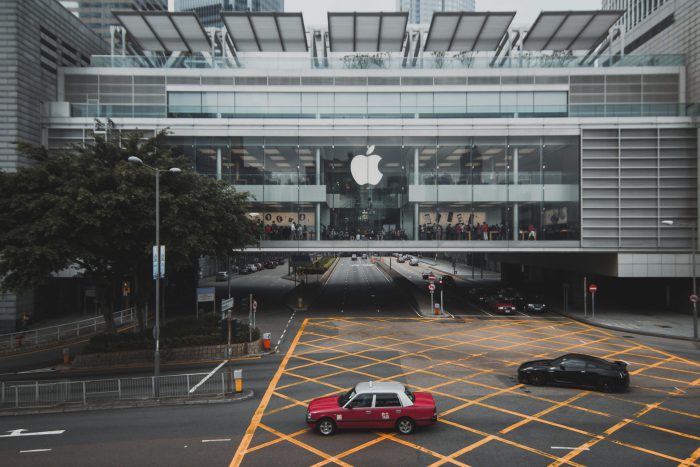 Photo by Alexandr Bormotin on Unsplash

57. According to a report on the State of Startup and Corporate Collaboration, 82% of responding corporations believe that it is somewhat important to work with startups in order to innovate.

58. Corporate innovation centers have greatly contributed to North America's strong positions in the global investment arena. The number will continue to rise in the future.

60. 20 percent of large companies take more than six months to start a deal stifling the chance of success - 500

61. Who are the fastest adopters of technology? According to the Digitial Transformation Report, those in IT, marketing, and customer care are the quickest to adopt technological change.

62. More than three-fifths of those in a senior executive position believe that the CEO is not leading the company from the front. They also feel as though their CEO lacks the passion and vision needed to drive innovation. 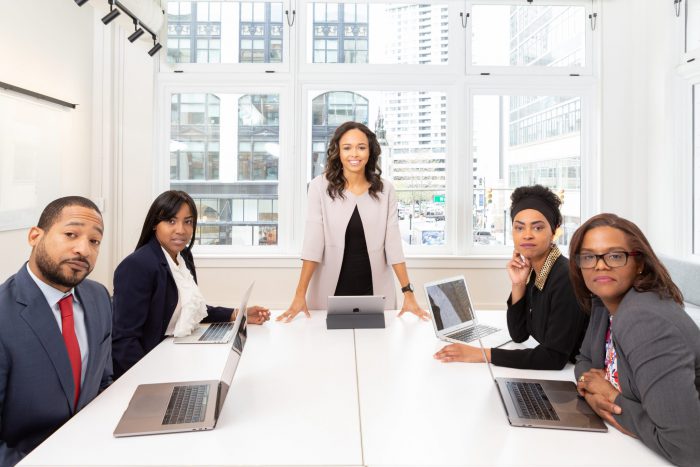 63. "Emerging markets such as Poland, South Africa, Malaysia and Saudi Arabia are experiencing the greatest increase in challenges." - Edelman Intelligence

64. A McKinsey report found that 94% of senior executives believe that corporate culture and the team are the most important drivers of innovation.

65. In the late 1950s, government labs primarily drove R&D. Only later did large corporations take over this role.

68. Apple and Stanley Black & Decker have become the two most innovative companies in the past 15 years.

69. "HR, legal, and manufacturing are considered to be the slowest adopters of technological change." - Futurum

70. While there is overlap between innovation strategy and business strategy, the two only work when they align.

71. "When you are trying to design and implement a new way of working, you really need a feedback loop. And that feedback needs to come from all the people involved, and not just what senior management thinks is the right thing to do. This helps to foster a culture of innovation." - Eddie Copeland, Director of Government Innovation, NESTA 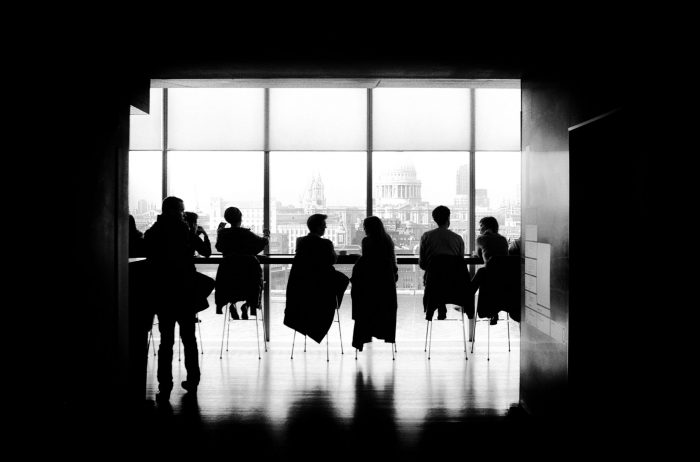 Photo by Samuel Zeller on Unsplash

72. 80% of executives think their current business models are at risk. Only very few know what the problem is and how to change.

73. "In 2018, fully testing new products and solutions before bringing them to market emerges as a preferred strategy, rather than charging ahead with minimum viable products." - Edelman Intelligence

74. In 2017, the BCG Global Innovation Survey found that the best performing companies supported open collaboration 77% of the time, allowing for an open structure for collaboration internally and externally.

75. "Failing fast without losing a customer is better than spending three hundred million dollars on a project that you take all the way out for a year or two." - Sue Siegel, CEO, GE Ventures

The facts above show that while we are shifting to a new and exciting mindset, roadblocks lie ahead.

For example, corporate dinosaurs who stay within a role for a long period of time adopt a rigid view of how to maintain success. And it often that CEO’s have a less than a practical understanding of new technology. Development times are long, and corporations are not always willing to take the risk.

But it does not have to mean the end for some of these large businesses. Today, market competition is as competitive as ever. Businesses and entire governments are constantly striving for new and innovative models to keep them on top.

We are shifting from the unhealthy mindset that to stay on top, one must invest heavily in internal research and development, and transparency with external parties should be limited.

Corporations are beginning to adopt an open or lean model of innovation through collaboration with young and agile companies around the world to create a truly healthy and dynamic ecosystem. 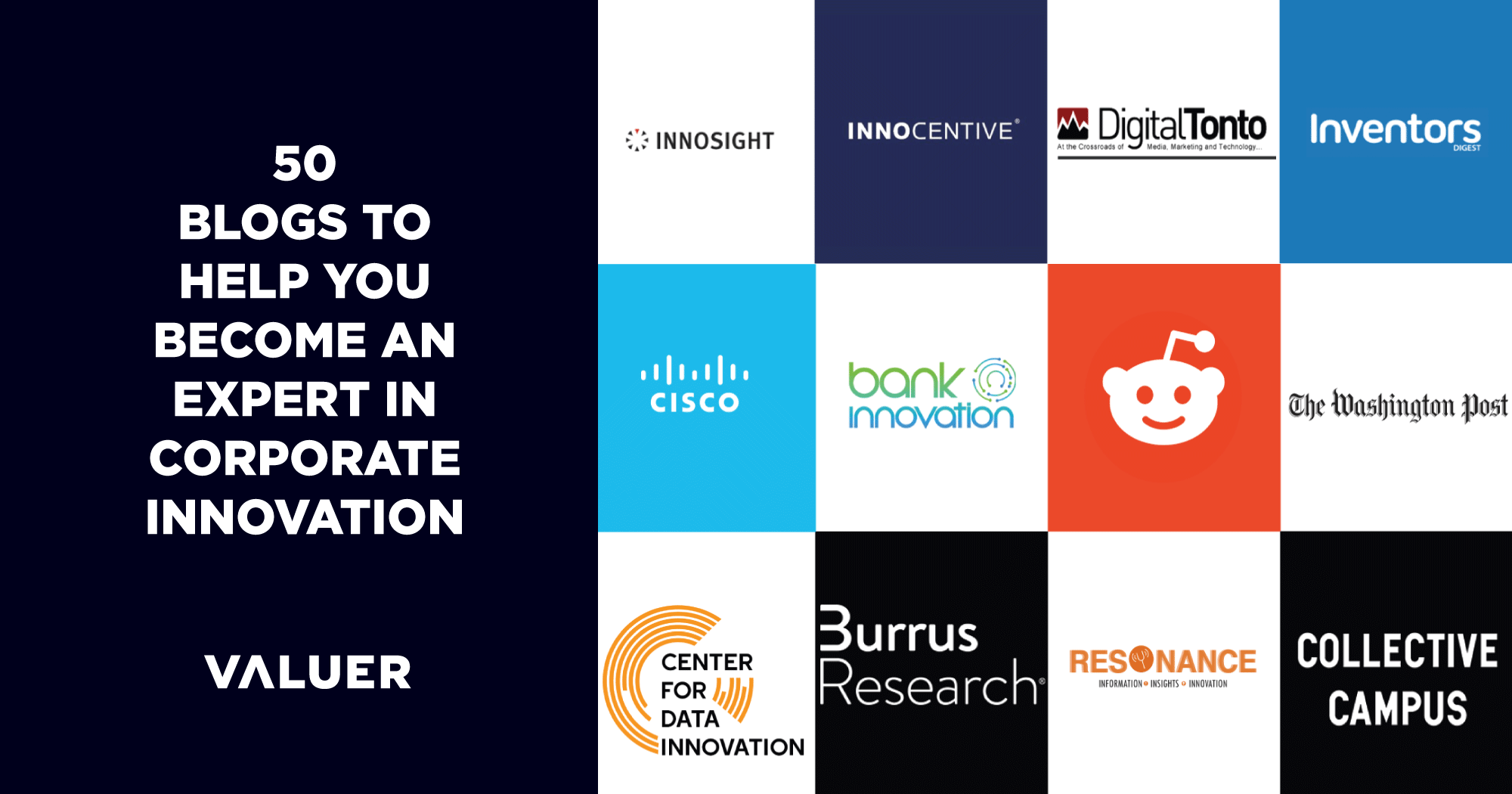 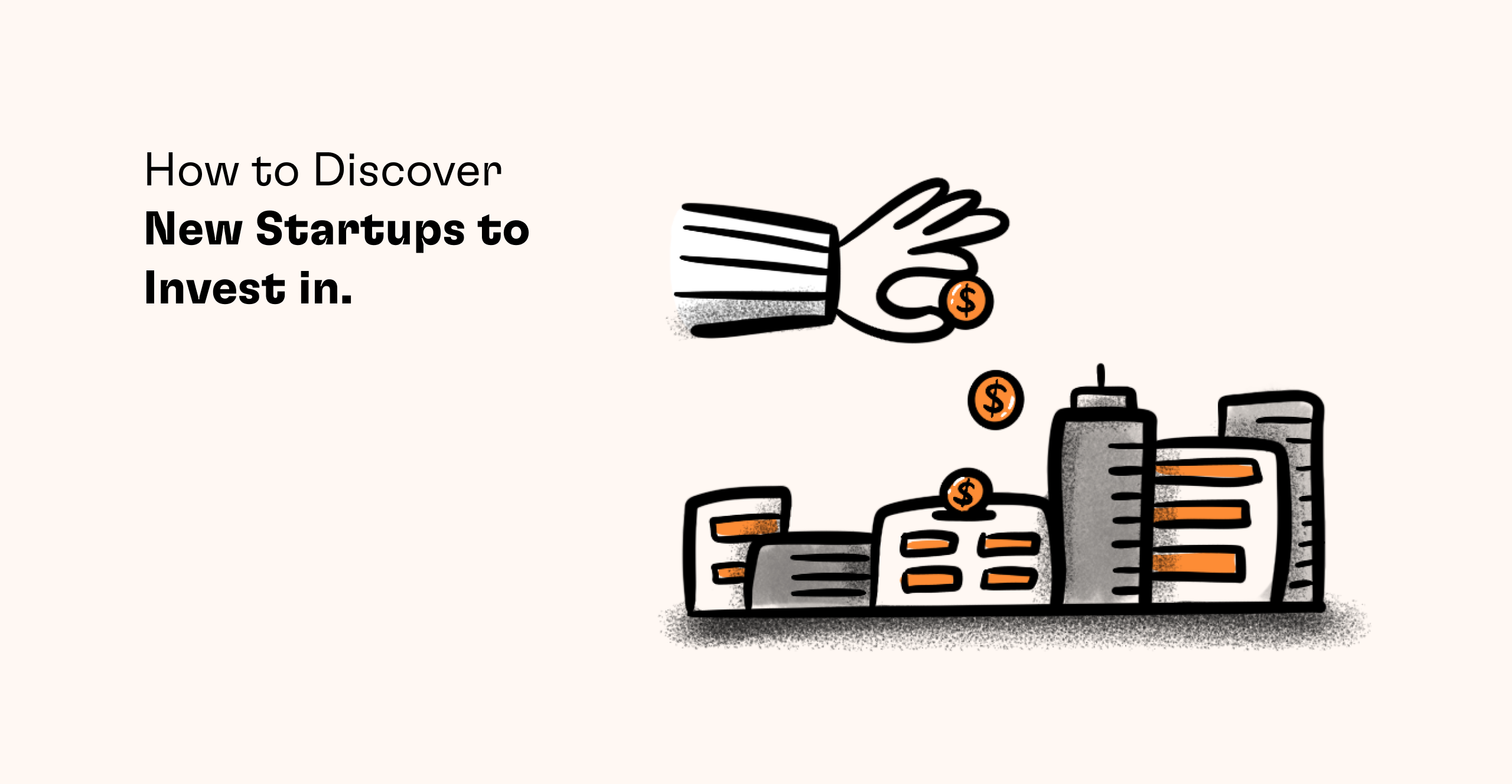 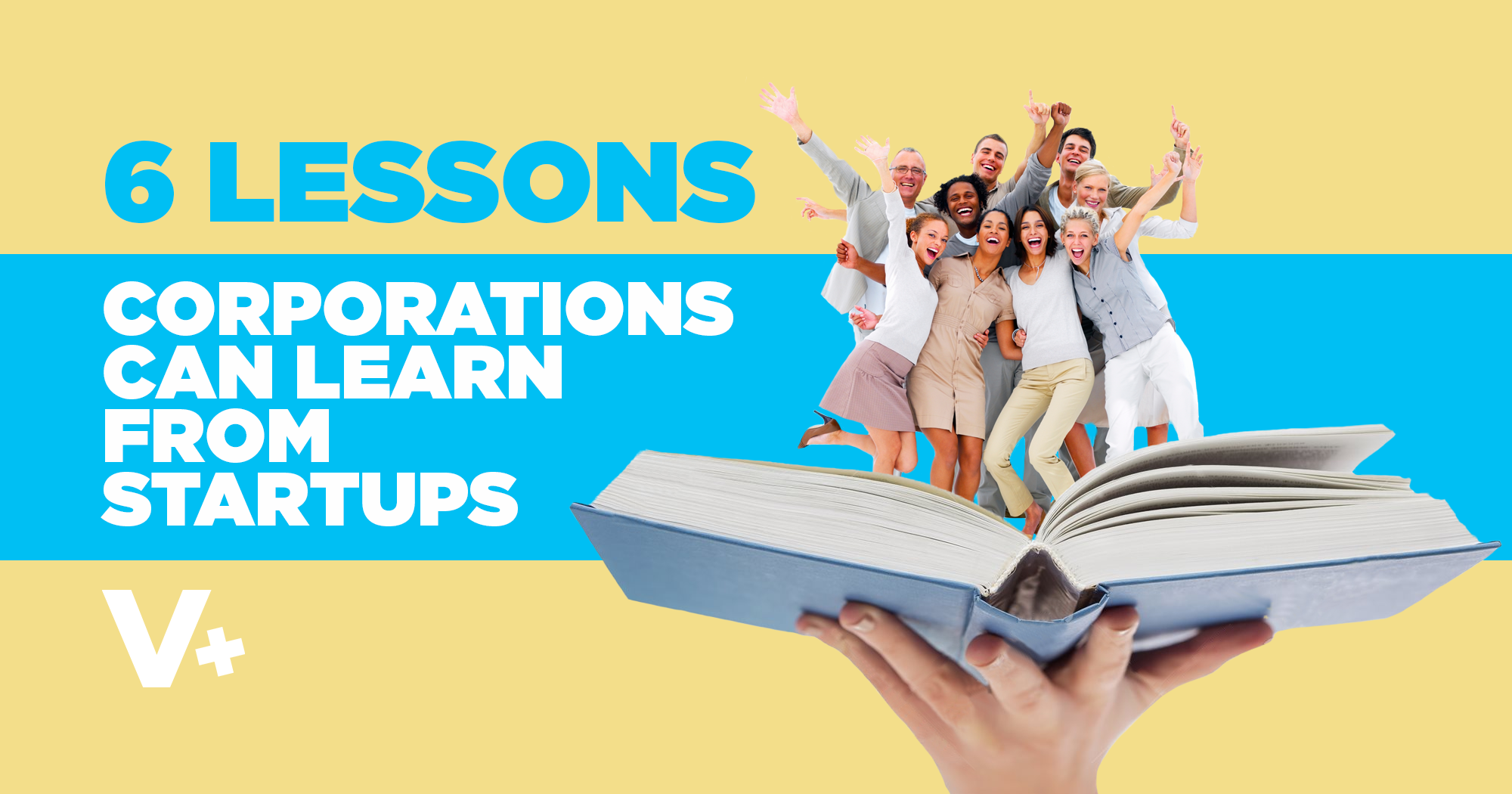 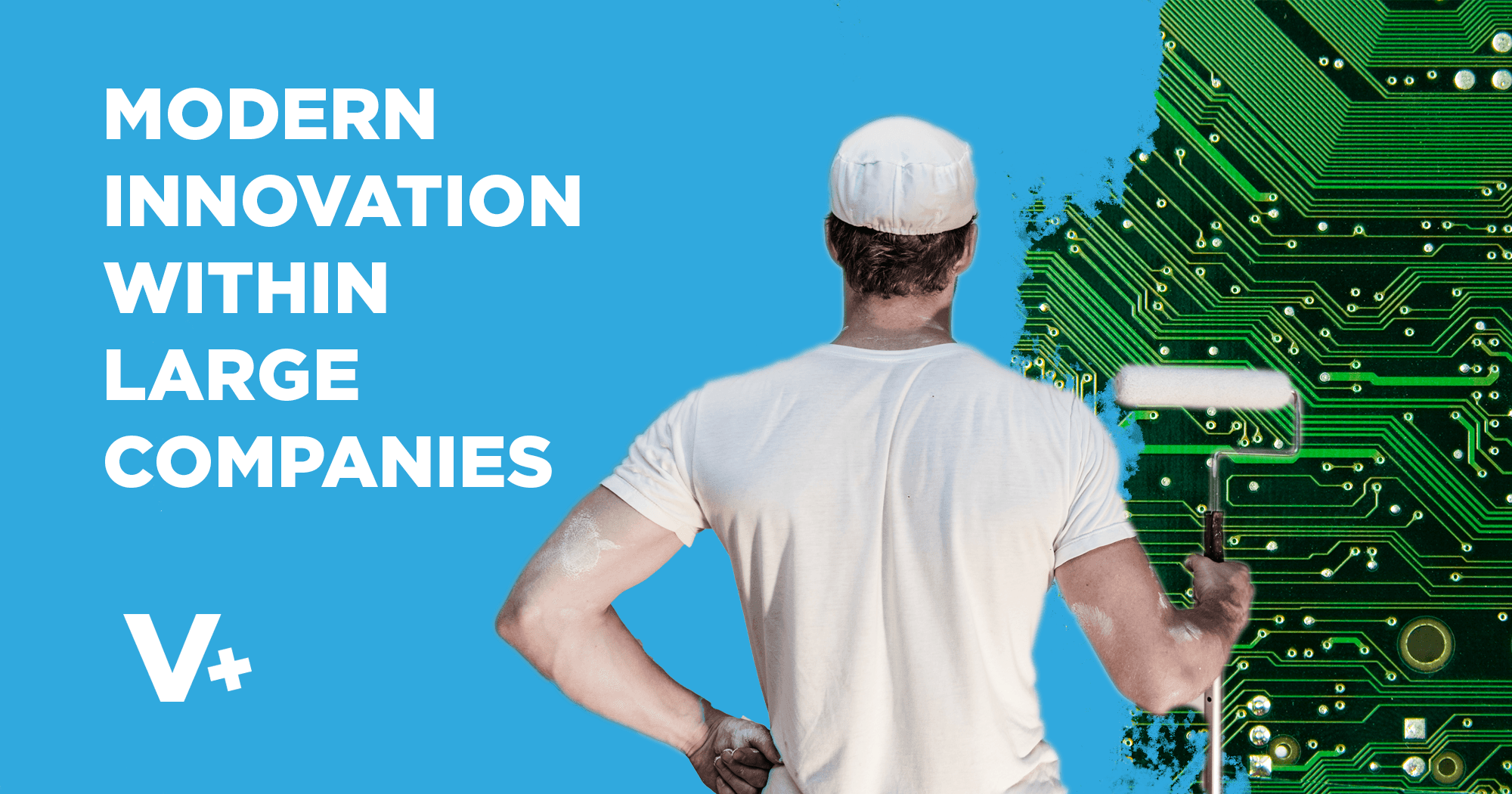 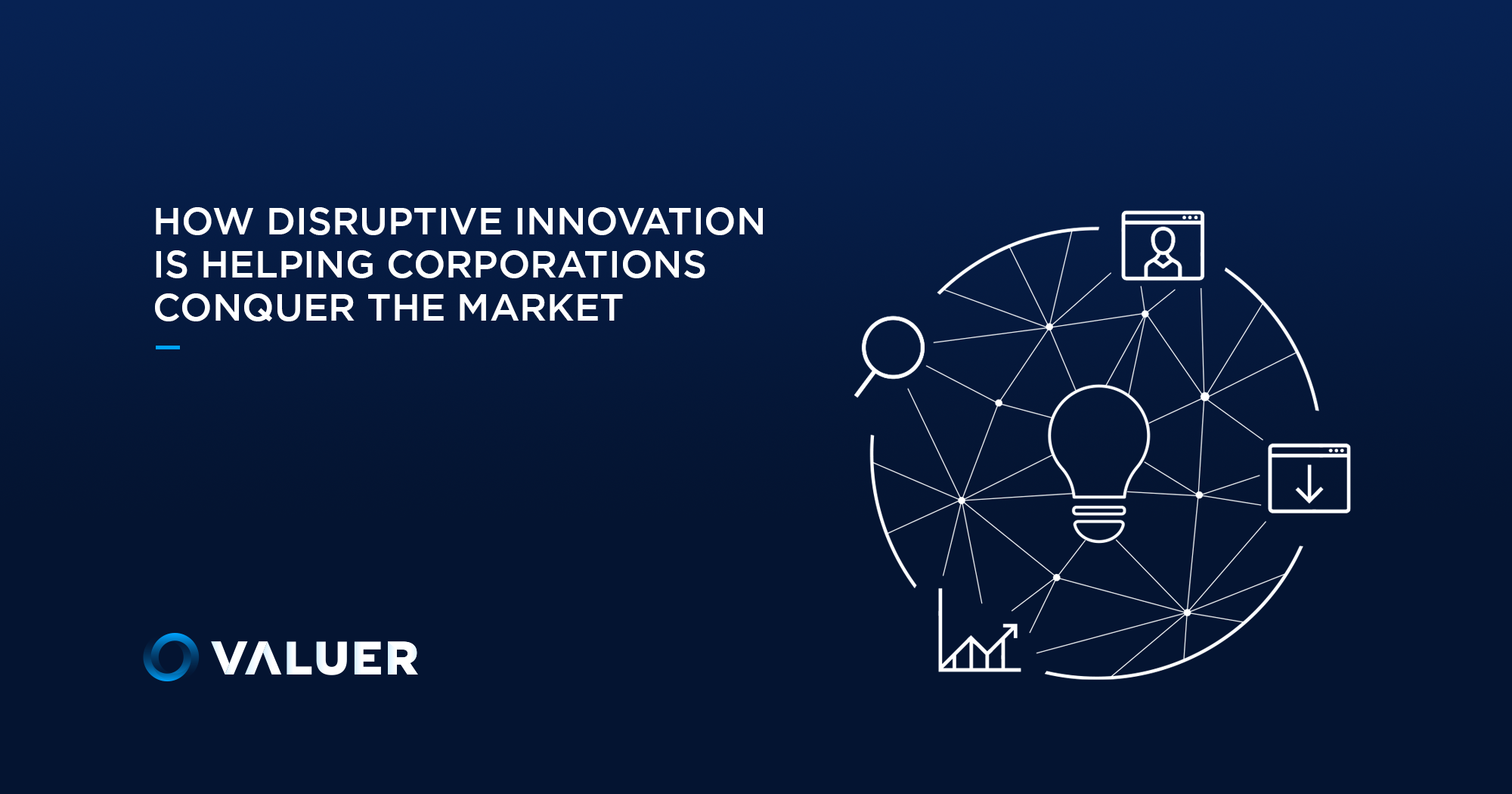 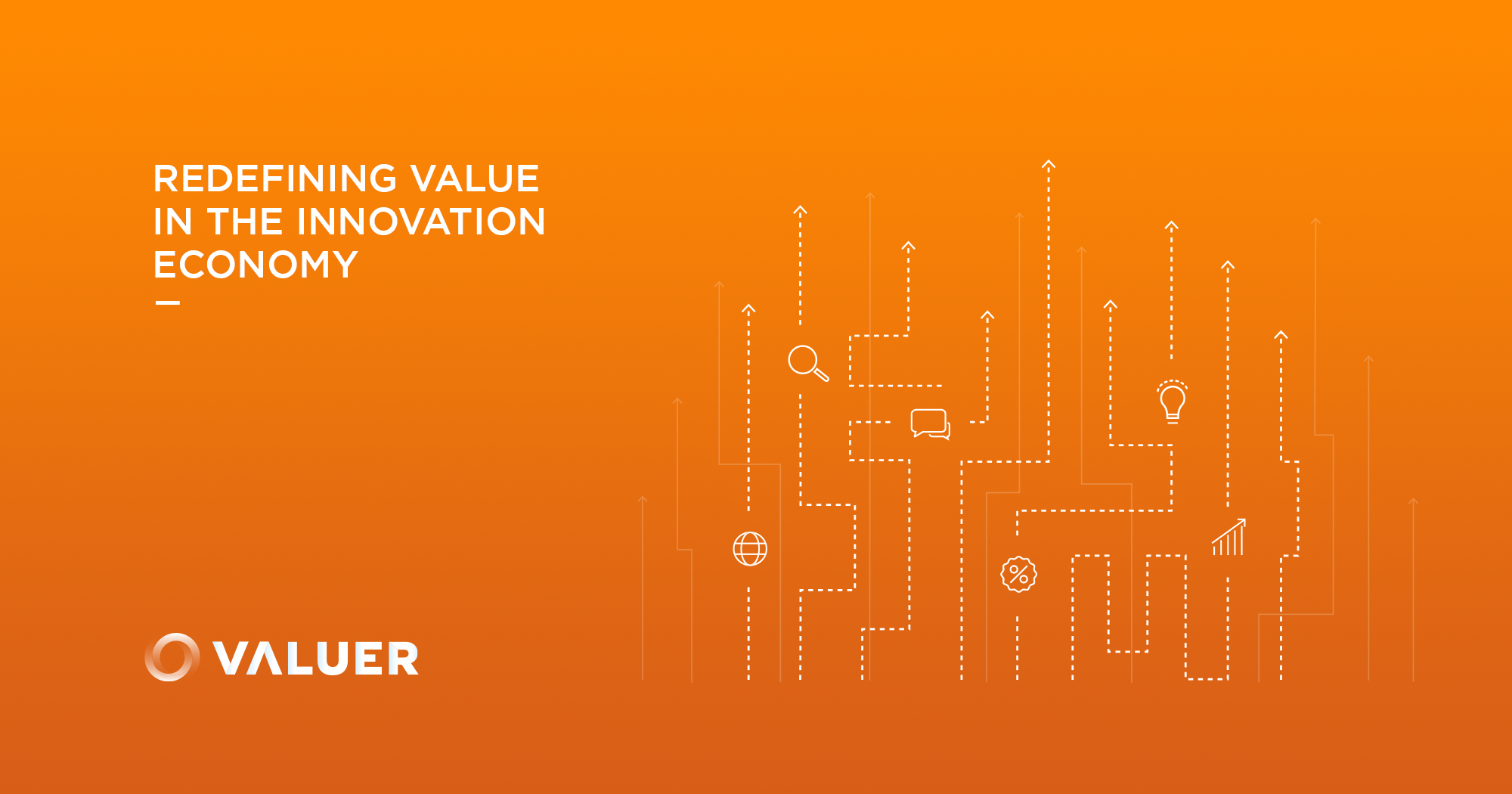 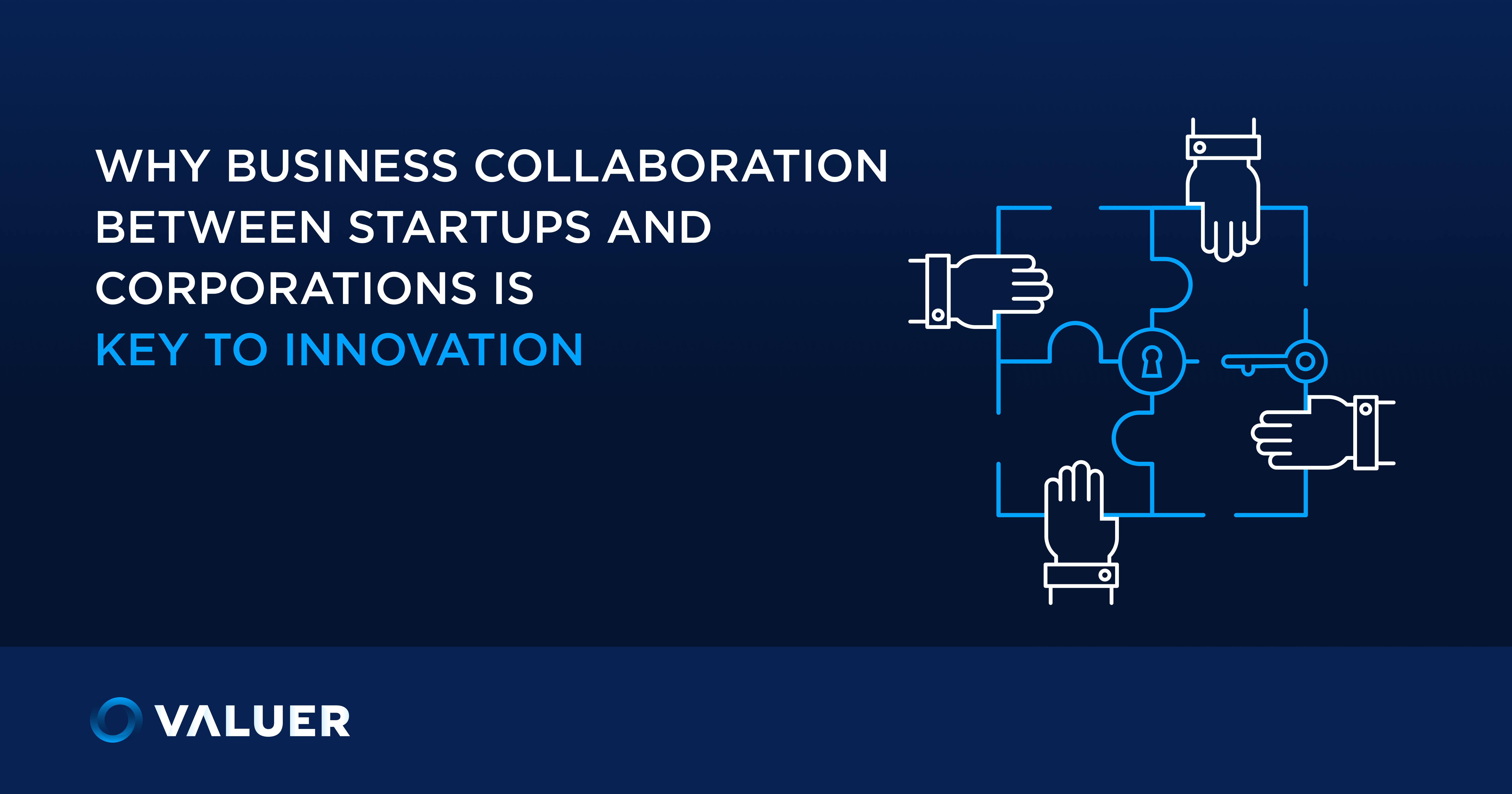 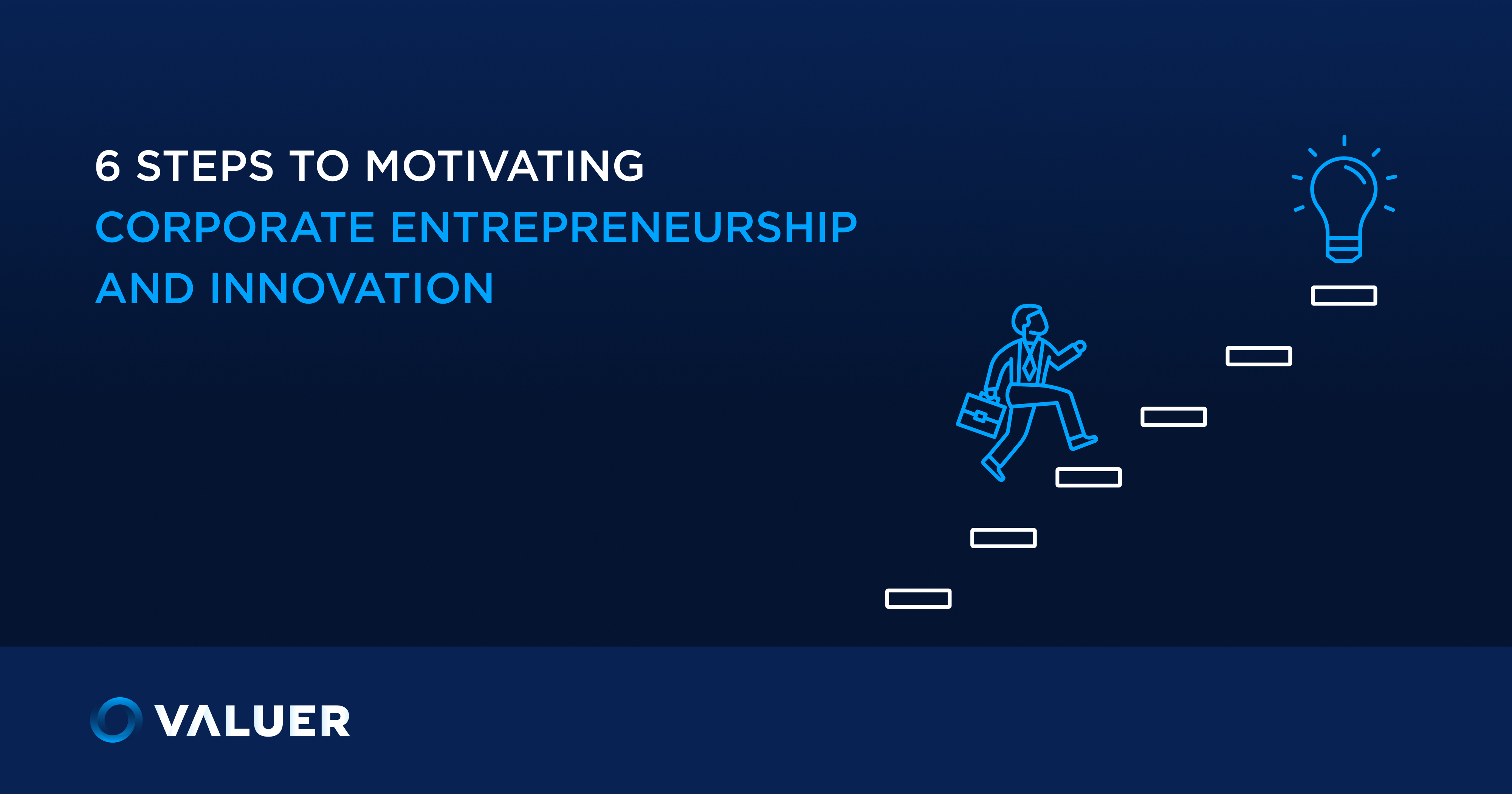